The (Tense) Present, a solo exhibition by Neal Ambrose-Smith (Confederated Salish and Kootenai Nation) that combines a range of imagery and media to create a complex reflection on current events. He demonstrates his technical skills, mixing painting, drawing, collage, and printmaking, including monotypes that measure over 10 feet long. His art references specific current events – including climate change, the current political situation, and Covid-19 – with cartoon cats, Marvin the Martian, Alice in Wonderland, Star Trek, and Joan Miró. A descendant of the Confederated Salish and Kootenai Nation of Montana, his work often includes elements surrounding Indigenous knowledge, including bundles, canoes, trailer homes, and the Trickster figure Coyote. In Neal Ambrose-Smith’s visions, the present is overlaid with images from the past since we can only understand where we now are by understanding our cultural influences.

On view concurrently with Afton Love: Perfect Union in the upstairs gallery, both exhibitions seek to give perspective on the chaos and tumult in the world by exploring two different approaches to looking at the passage of time. Ambrose-Smith has created a large body of work to channel his anger, fear, sadness, and uncertainty in the face of the current political and social upheaval. In contrast, Love shares a geological sense of time. Her large-scale drawings of rock formations consider the time span of hundreds of thousands of years. 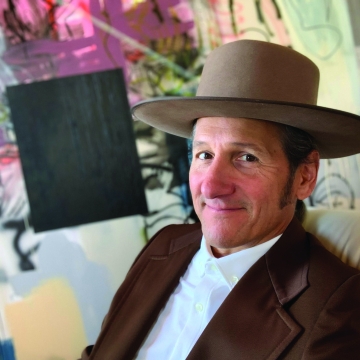 Neal Ambrose-Smith (b. 1966) holds an MFA degree in printmaking from the University of New Mexico, teaches painting and printmaking at the Institute of American Indian Arts in Santa Fe. He and has shown his prints internationally in South Korea, France, Ireland, and across the US., and has taught new tech printmaking workshops at universities and conferences for more than a decade. Throughout the 1990s and 2000s, Ambrose-Smith collaborated on sculpture projects and shows with his mother Jaune Quick-to-See Smith. He worked for The Joan Mitchell Foundation’s CALL program (Creating a Living Legacy) in New York from 2007 to 2014 as a research consultant and program developer. Currently he is Chair of the Studio Arts Department at the Institute of American Indian Arts in Santa Fe, where he heads the printmaking program (2015-present). His work is in many collections, including the New York Public Library Print Collection; the Smithsonian National Museum of the American Indian, Washington, D.C.; Flint Institute, Michigan; Hongik University, Seoul, South Korea; Denver Art Museum; Monash University, Gippsland, Australia; the Eiteljorg Museum of American Indians and Western Art, Indianapolis; Cork Printmakers Collection, Cork, Ireland; Missoula Art Museum; Tia Collection and Salish Kootenai College, Montana.